What are ACE2 of human host cell and S-Protein of COVID-19?

How new corona virus attaches to the receptor of our host cell called angiotensin-converting enzyme 2(ACE2) of which system is also a key player of treatment of hypertension.

What is the most dreadful symptom to make infected people fall into serious pneumonia?

IT IS CYTOKINE STORM causing Sudden Crash in Patients withCOVID-19!!

TENS OF MILLIONS OF PEOPLE were killed by CYTOKINE STORMduring the pandemic of Spanish flu.

Cytokine Stormis now seen as a likely major cause of mortality in the 1918-20 “Spanish flu”–which killed more than 50 million people worldwide and the H1N1 “swine flu” in 2009and H5N1 “bird flu” of recent years—and now COVID-19.

What Cytokines are causing infected people of Covid-19 with serious lung disease?

When theCytokinesthat raise immune activity become too much abundant, the immune system is not able to stop itself. Those immune cells spread beyond infected body parts mainly from lungs and start attacking healthy tissues, gobbling up red and white blood cells and damaging the lung and liver. The blood vessels get so leaky that the lungs may fill with fluid and fall into acute respiratory distress.

Apart from a surge in main Cytokine of interleukin-6,the body may also show high swirling levels of other Cytokines,Chemokines and Serine ProteasecalledTNF, IFN-ab, IL-1, and Mcp1/CCL2. neutrophil- and monocyte-associated MMP-9, neutrophil elastase.

Dr. Randy Cron, a professor at the University of Alabama at Birmingham, says at the New York Times that “Cytokine Stormhappens when the pro-inflammatory cytokinesget out of control in abundance. Instead of helping to fight virus and bacteria, it gets overly activated and that these affluent pro-inflammatory cytokinesis what leads to multi-organ failureand potentially death,

Cytokine Stormis now understood as a major cause of mortality in the 1918-20 “Spanish flu”–which killed more than 50 million peopleworldwide and the H1N1 “swine flu” and H5N1 “bird flu” of recent years—and nowCOVID-19.

British Medical Journal LANCETannounced that the US Center for Disease Control (CDC)estimated the death toll to be approximately more than 280,000worldwide.

In 2002, Asahikawa Medical Universityannounced that it had a remarkable inhibitory effect by 98% on the adsorption of influenza A and Bon human cells by Anthocyanins/phenolic of blackcurrant.

Four species of influenza were blocked to enter into human cells by blackcurrant anthocyanins!!

Numerous studies shows that blackcurrant anthocyanins(BA) dampen inflammation through multiple pathways. Directly or indirectly the four compositions of blackcurrant anthocyanins and polyphenols suppress the activity of nuclear transcription factors, such as NFκB, and reduce the production of pro-inflammatory enzymes and cytokines, including COX2, tumor necrosis factor (TNF)-α, and interleukin (IL)-4, 6, 8 with serine proteases while anti-inflammatory cytokines IL10 , IL13 secreted by BA support to counterbalance the adaptive immune cells in inflammatory diseases.

Researchers showed the exact same Blackcurrant Anthocyanins extract found in Vision Smart Supreme had incredibly powerful anti-viral and anti-bacterial effects. This led researchers to state, “The findings demonstrate the potential of blackcurrant extract as a functional food for cold and flu care”! 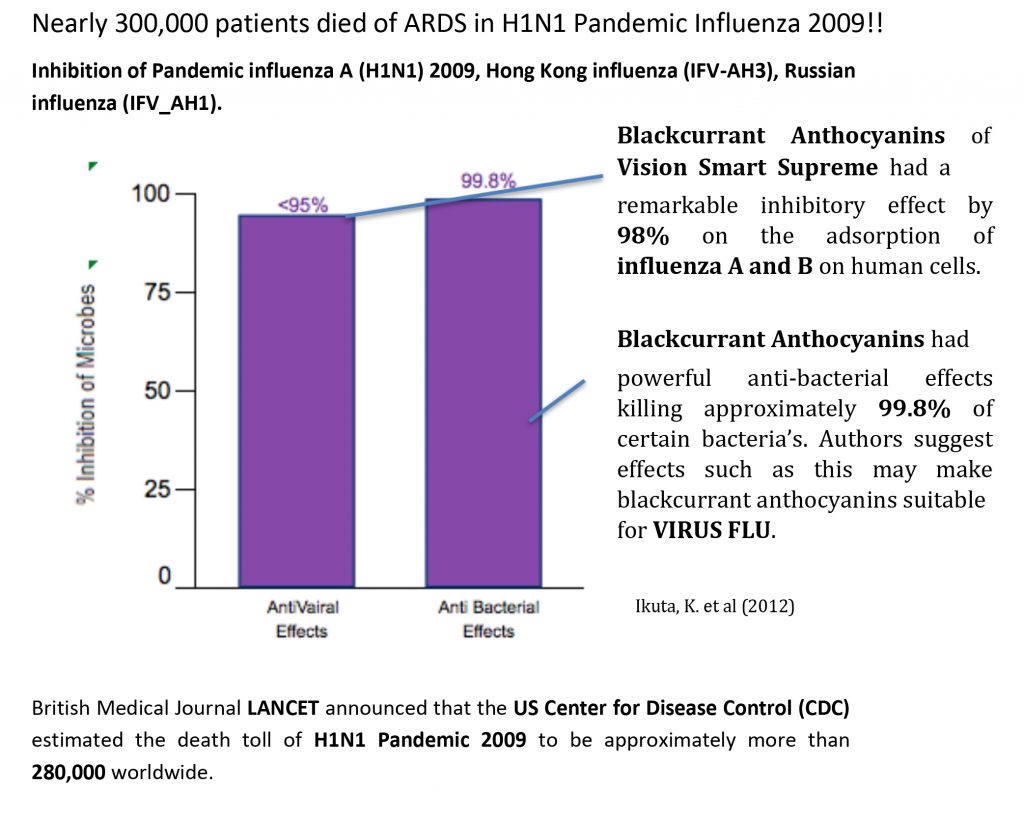 Norwegian researchers found Blackcurrant reduced the amounts of inflammatory compounds in the blood. These exciting results suggest Vision Smart Supreme (with the highest available does of blackcurrant anthocyanins) may be useful in protecting against Influenza.

Results: Significant reduction of inflammatory compounds in the blood

Institution: University of Oslo and the Ullevaal University Hospital in Norway 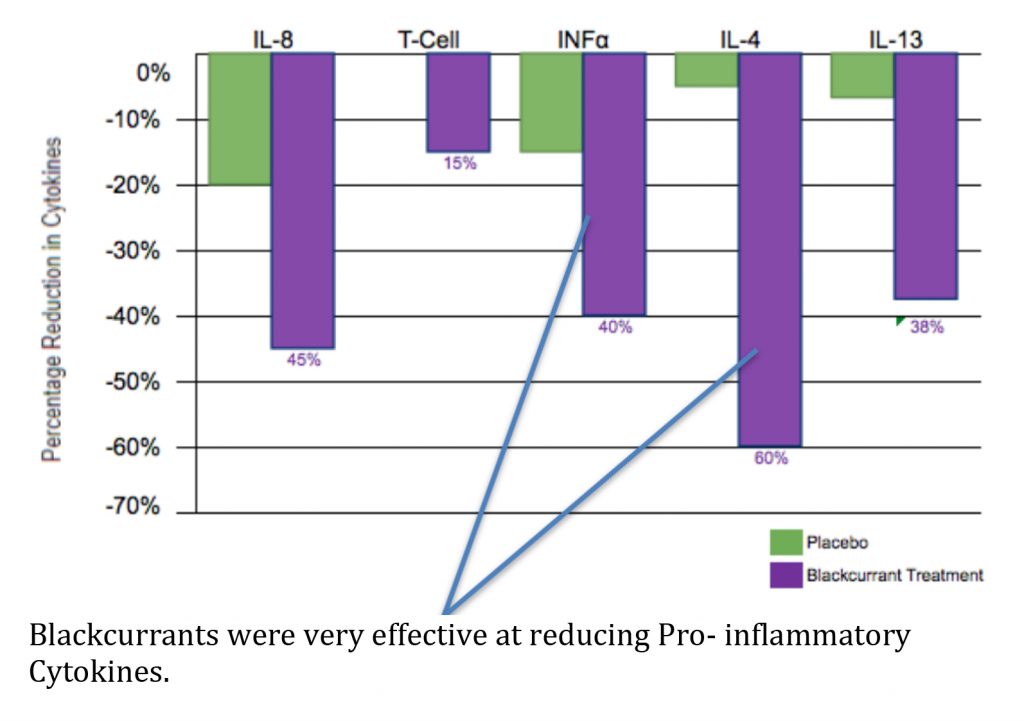 COVID-19 is the same respiratory disease as influenza, and the new viral gene has many similarities with the SARS virus, so it was named SARS-CoV-2.

Specific symptoms may start with fever, cough, no smell, and no taste and eventually develop acute pneumonia like ARDS caused by Cytokine Storm.

The Lancet Medical Journalsays that 25% of people are asymptomatic but others get infected from those infected people with no symptoms and 21% of the infected people become serious ill and need mechanical ventilation to survive from ARDS. The Lancet emphasizes that in the getting ill process of infected people there are clearly three steps:

The coronavirus itself does not mostly and directly damage the body but their own defense system of cytokinescauses their body’s immune system to overreact, resulting in bad infections in his own lungs, heart, kidneys, which may results in multiple organ failuresuch as sepsis.

Covid-19 is on track to kill far more people in the United States this year than the seasonal flu.

But some people don’t even get symptoms. Recent studies suggest as many as 80 percent or more of those infected are “silent carriers”, showing no or very mild symptoms. It seems children and young, healthy people are more likely to be asymptomatic.

Having a strong immune response during the incubation period can prevent the infection taking hold, reduce the actual quantity of virus in the body and prevent it from getting to the lungs.

By generating an early adaptive immune response, the body seems to recognize the virus during the incubation period and fight it off.

A person also needs to be generally healthy to be able to mount an appropriate immune response to the infection.

Elderly people and those with chronic lung disorders are more likely to develop ARDS and therefore to die if they got infected. This is currently thought to be due to these groups of people having fewer ACE2 receptors in their lungs.

This seems counter-intuitive, because the virus attaches itself to these receptors. However, ACE2 receptors have an important role in regulating the immune response, particularly in managing the degree of inflammation.

So the reduced levels of ACE2 receptors in the elderly may actually make them more at risk of a cytokine storm and severe lung disease.

The pandemic has upended life around the world, crippling the global economy and creating a “new normal” for World People Life and Economy.

Although German prime minister Angela Merkel said at the G-20 video conference 3/25 this year that “This pandemic is a global challenge and we will therefore also only able to overcome it globally under a joint collaboration in development and distribution” , however during the past experiences of the 2009 flu pandemic causing approximately 300,000 death all the countries agreed to develop and distribute globally, but the countries who could afford to bought up and hoarded them to ensure their countries’ populations would get satisfied with  their own vaccinated  once those new vaccines came to the markets first.

It has been evident that people who have good health with excellent adaptive immune responses could be able to survive from the past 2009 flu Pandemic, SARS and MERS without suffering nothing or from serious sickness because it also took a year from each break-out to develop those vaccines and spent another year to distribute in the world with massive commercialized production completed.

Please Stay Safe and Healthy For Yourself and Your Family!!