Numerous health-promoting components found naturally in New Zealand Cassis berries, including anthocyanins and polyphenols, have powerful antioxidant capabilities that help to combat harmful inflammation within the body. Also found naturally in these impressive berries is essential fatty acid gamma linolenic acid (GLA) which research suggests may have the ability to regulate the body’s inflammatory responses. 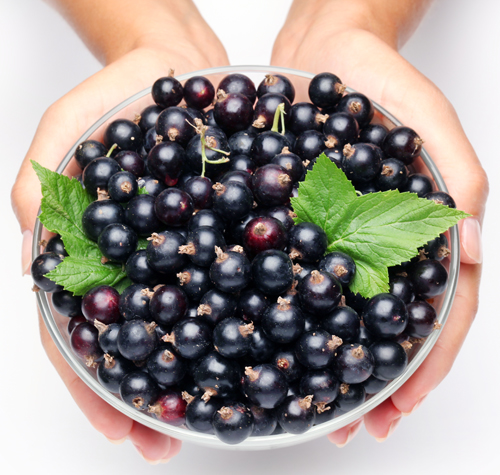 New Zealand Cassis’ ability to control inflammation is a key benefit for human health, because excessive inflammation is a key cause for many of the body’s illnesses and symptoms. Brain health, such as Alzheimer’s and Parkinson’s diseases and advanced aging are attributed to elevated inflammation, along with vision illnesses such as glaucoma and macular degeneration. Inflammation may also play a key role in arthritis and joint pain, and swelling in the lungs has been recognized as a major cause of asthma.

Numerous studies have recently been conducted using a wide variety of fruit juices and extracts, investigating their abilities to combat muscle strain and injury, and improve muscle recovery related to exercise. One of the most widely recognized studies was conducted by the New Zealand Institute for Plant and Food Research, which explored the prevention of exercise-induced oxidative stress. This three-week study utilized 10 health individuals that were given either four New Zealand Cassis extract supplements (two prior to, and two after exercise) or a placebo, and subjected to a 30 minute rowing exercise daily. 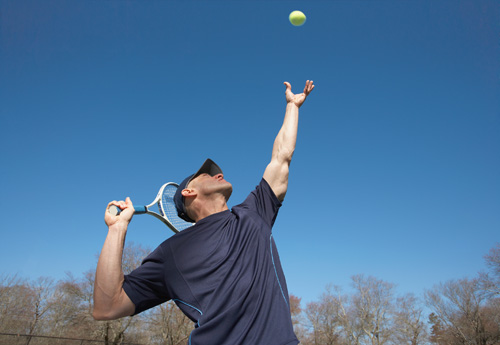 Numerous tests were conducted, including the measure of protein carbonyl levels. Toxic carbonyls can be formed within the body after extensive exercise, due to free radical oxidation. These components can be harmful to human health, and hinder the body’s ability to recover from exercise. The results showed that the placebo group evoked a dramatic increase in toxic carbonyl throughout the blood, while the Cassis extract group had no increase in these harmful levels. Numerous other forms of testing found that Cassis extracts inhibited the oxidative stress associated with exercise, and continue reducing this stress post-exercise, up to 24 hours. 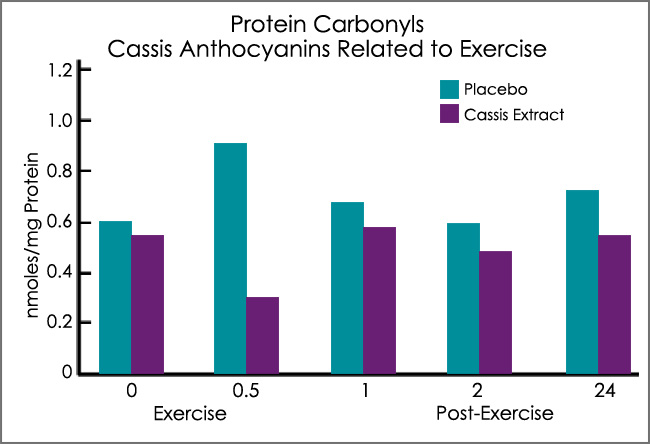 The research then explored parts of plasma and blood, along with Cassis extract’s ability to alter the elements (know as LPS) that stimulate acute inflammatory responses. The results found that when cells were treated with Cassis extracts (either 5 ng/ml or 50 ng/ml) 30 minutes prior to the stimulation of LPS, a key suppression of the inflammatory cytokine TNF-α occurred. This suppression was both time, and concentration dependent. Because research has linked TNF-α to advanced pain, arthritis, joint inflammation, and even enhanced tumor growth, it is important that Cassis extracts are able to inhibit the secretion of this harmful component within the body. Stopping TNF-α within the body may help to alleviate muscle aches and strain post-exercise, while promoting muscle strength and endurance during exercise. 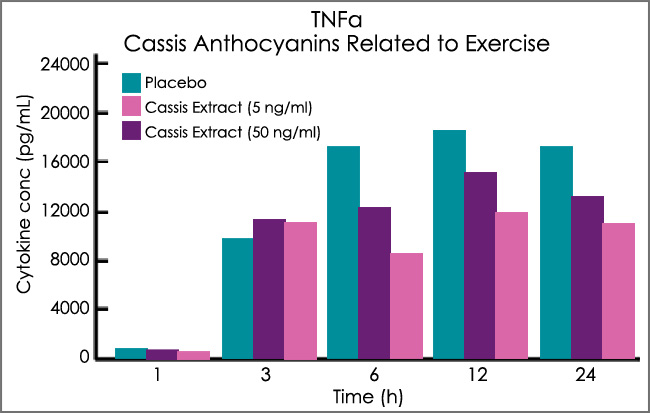 The conclusion of this extensive study stated that if used with the appropriate dosage and timing, Cassis extracts may enhance the health benefits associated with exercise. Specifically, when consuming Cassis anthocyanins prior to, and post exercise, there may be a decrease in the oxidative stress linked to muscle and tissue damage.

“Our findings support the concept that fruits and vegetables rich in anthocyanins, if consumed in the appropriate amounts and at the optimum time, have the ability to augment the health benefits of regular exercise”

An addition study conducted by The New Zealand Institute for Plant and Food Research Ltd. used 8-12 week old mice, who consumed a Cassis juice prior to exercise, and results were taken with no exercise, and at 0, 1, 3, and 24 hours after exercise. The results of this study found that Cassis juice may have a positive effect on overall muscle performance. 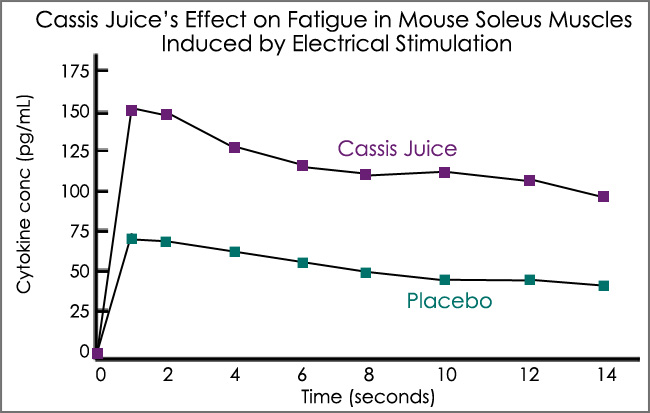 Effect of fruit juices on fatigue in mouse soleus muscles induced by electrical stimulation. Muscles incubated with Cassis juices or placebo, compared with buffer-only controls. A minimum of five muscles were analyzed for each group. “Evaluating the Health Benefits of Fruits for Physical Fitness: A Research Platform.” Health & Food Group, The New Zealand Institute for Plant and Food Research, Ltd.

Another placebo-controlled study was published in the Journal of Science and Medicine in Sport, in which eight well-trained cyclists performed 90 minutes of laboratory work after consuming 480 mg of Cassis anthocyanins. The researchers determined that this single dose provided a nutritional intervention for these athletes prior to intense athletic training.

LUNG INFLAMMATION MAY LEAD TO ASTHMA

According to a study recently conducted by the Molecular Nutrition and Food Research, lung inflammation may be caused by the introduction of allergens to the body. This inflammation may initiate Eotaxin-3 (CCL26, an eotaxin isoform associated with asthma), which results in an eosinophil damage in the lungs. This CCL26 effect ultimately causes asthma, and the study tested the abilities of polyphenol extracts to combat the harmful effects of CCL26 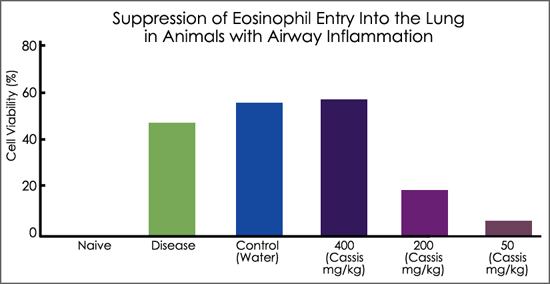 At the Conference of the Japanese Association for Food Immunology, a study was introduced that revealed the relationship between cassis-derived polysaccharides, inflammation, and cancer. The study reviewed the ability of these polysaccharides to stimulate macrophage (white blood cells that initiate the body’s defense systems), while inducing IL-1beta, which mediates inflammation. The purpose of these tests was to conclude how the polysaccharides and their functions combat tumor cells, and the results conclude that Cassis polysaccharides can suppress tumor growth by 51%. 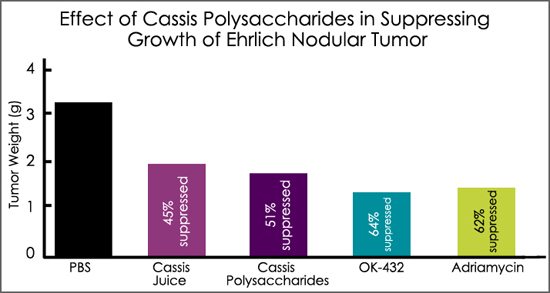 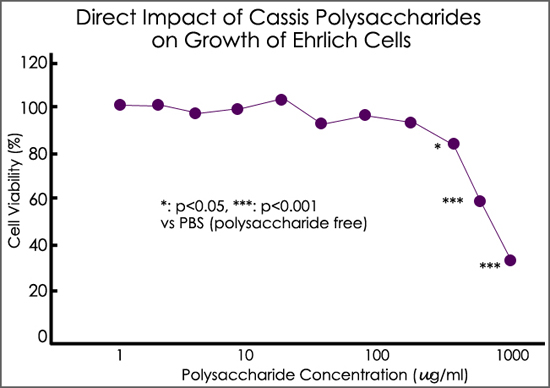 Arthritis is primarily caused by an infiltration of white blood cells into the soft tissues that line joints, which initiates inflammation and dysregulates T helper 1 responses. Due to its anti-inflammatory capabilities, numerous studies have been conducted on essential fatty acid and arthritis. Published in “Arthritis and Rheumatism”, a six-month study was conducted with 56 Rheumatoid Arthritis (RA) sufferers. Patients were given either 2.8 mg of GLA daily, or a placebo, and the results were calculated at six months and one year. The results showed that those being treated with GLA had significantly reduced symptoms of RA, and the researchers concluded that, “GLA at doses used in this study is a well-tolerated and effective treatment for active RA.” (Gamma-linolenic Acid Treatment of Rheumatoid Arthritis. A Randomized, Placebo-Controlled Trail. Zurier, Rossetti, Jacobson, Demarco, Liu, Temming, White, Laposata) 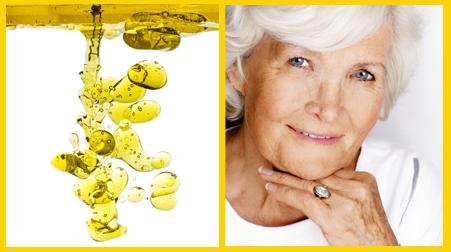