Recently, the use of computer screens, interactive cell phones, television screens, and other terminal usage has dramatically increased, and unfortunately this escalating screen usage has lead to widespread eye fatigue conditions. In addition to eye fatigue, suffers also endure pain and stiffness throughout the neck, back, shoulders, head, and arms.

Eye fatigue is primarily caused by over-use of the eye, specifically  during lengthy screen and terminal use.

A recent Meiji University study tested 21 healthy volunteers to determine the benefits of Cassis anthocyanins after extensive screen and PC use. After two hours of consecutive use, and the Cassis anthocyanin group showed dramatic reductions in all five areas of fatigue. 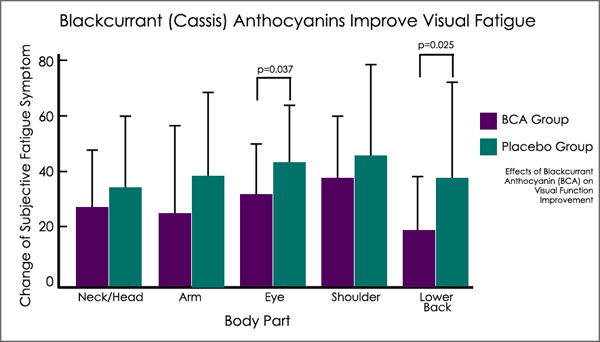 An additional section of this Meiji study gave 10 healthy volunteers 40 mg of New Zealand Cassis anthocyanidins, bilberry anthocyanindins, or placebo two hours before screen use. The Cassis anthocyanidins offered a significantly increased refraction value, leading to improved sight and vision during screen and terminal work, while the bilberry subjects had deteriorated refraction values. 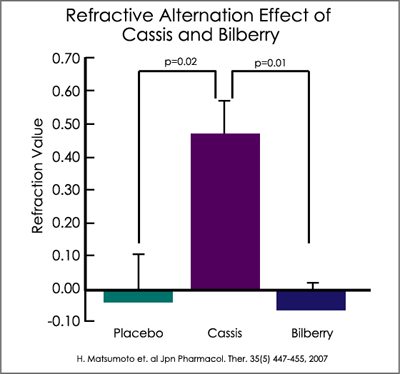 Visual results of the Meiji University Study “Comparison between Cassis and Blueberry: Change in refractivity with two-hour computer workload, two hours after consumption”

ANTHOCYANINS APPEAR INTACT WITHIN THE BODY AFTER ONLY 15 MINUTES

Another study printed by the Journal of Agriculture and Food Chemistry tested the length of time that it took Cassis anthocyanins to begin working, and the results showed that anthocyanins appeared intact within the body only 15 minutes post-consumption. The beneficial effects lasted 6 hours, which could mean near-immediate relief for eye and body fatigue sufferers after anthocyanin consumption. 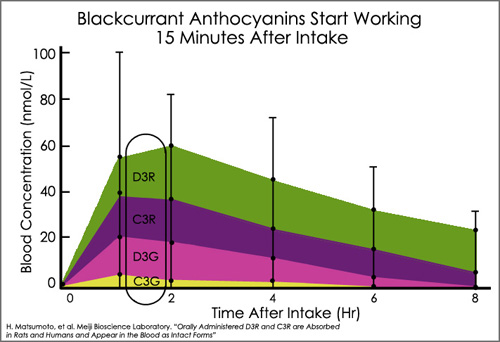 These testing results show that New Zealand Cassis anthocyanins can dramatically improve the painful symptoms associated with screen and terminal work. As the use of computers and smart phones increases, the Vision Smart Center understands that it is imperative to have natural relief for this harsh eye fatigue and related body fatigue.